"Teacher, you say? It kind of tickles to be called that after such a long time..."

Aty (アティ, Ati) is the female main character of Summon Night 3, her male counterpart being Rexx. She is playable in the PSP version of Summon Night 4 via the game's puppet system. She returns as an important NPC in Summon Night 5. She also appears as a playable solo unit in Project X Zone 2.

Aty's greatest quality is her kindness, but it also is her biggest flaw. She often fails to see the evil on people and end up trusting anyone. She prefers to suffer than doubting someone. Consequently, she is also very positive, always seeing hope in any situation.

In Project X Zone 2, the majority of Aty's in-battle lines refer to her position as a teacher, defining her core personality in the game.

Aty was born in a very poor village in the Empire, they were often attacked by bandits and many died in those attacks. Aty joined the army so she could find the power to protect them. She was very talented and was trusted to take care of important missions, however, she was too naïve. She was assigned to watch a spy from the Old Kingdom capture by her division, but Aty let the man go free because she felt compassion for him. It was when a noble of the Martini family was taken hostage by the same spy. Being responsible for the incident, Aty volunteer to go on a very dangerous rescue mission all alone. She almost died but got to rescue the noble. After this event, Aty was treated as a heroine in the army, however, behind the curtains the high ups knew she was at fault for everything. They just didn’t forced Aty to resigned because she did it herself first. Many people that didn’t knew the truth and even who knew the entire thing didn’t accept her decision, including Azlier.

Trying to move on with her life, she started her first job as a private tutor because of a request from the head of the famous Martini family, the very same noble that she rescued in the past. She was to teach Martini’s child in another city but their ship was attacked by pirates and they got caught by a storm that threw him and her student from the ship. Even when she herself was almost drowned, she was just thinking about her pupil’s life. It was when a mysterious voice gave her the power she needed: The magical sword “Shartos” that granted her many abilities. When she woke up, she was on a Island full of weird creatures, her student was safe and together with a tiny stray summon, She later found the pirates that attacked the ship and they made a alliance until they got out of that Island. They discovered that the Island was a abandoned test site of many experiments made by the Colorless Faction and everyone living there is a Summon beast. She helped the inhabitants to protect the island against the army and earned their trust. By a request from the princess of the Oni, she made a school to teach the children of the island about the outside world. As a result, everyone began to call her "Teacher"(Sensei), even the adults.

One day a boy called Ishlar was found unconscious and was treated by Aty and her friends. His fragile appearance and his gentle look made them open for an attack when Ishlar reveled to be a spy working for the Colorless Faction. He made hostages, made threats and they fought many times, until Ishlar broke Aty’s Shartos with his own magic sword: “Crissles”, handed to him by Ordreik, as turn out those two swords were created by the Colorless Faction to control the island installations. Aty had lost her will to fight but her student gave her courage and Wizell unexpectedly fixed her sword. Shartos is reborn as Wistalias and Aty starts to being called "Saver" by the inhabitants of the island.

In the True ending, she joins the party and defeat the High Ranks of the Colorless Faction, Ishlar and finally, the corrupted Elgo (DE-Elgo) created by Hainel - the last user of Shartos. After the battle she freed Hainel’s spirit, and finally was able to go out the island. After she finishes her work as tutor she decides to go back to the island and live there as its guardian forever. Many years later her friends in the island get very sick and they decide to look for a cure in the outside world. However, they suddenly get better and later she learns that it was all thanks to her student and a group of mysterious guests.

In the Karma Ending, Aty is corrupted by DE-Elgo during her fight with Ordreik, she kills all their enemies by herself but it takes everything in her to resist the urge to kill her friends. She runs to where she can’t hurt anyone again, but her student decides to travel the world to look for her.

Centuries after have helping save the world during the World Warp War, Aty became the only of the 5 legendary heroes to remain alive in the present Astreiz Era. She returned to the Forsaken Island and helped to transform it in a great metropolis by using her influence to get other powerful organizations as the Association of Pacts to help too, resulting in the island being reborn as Savorle City. However, because of her absurd powers of Saver, her own existence became a secret, as it was believed that people from other regions would come to fear or even hate their island if they knew Savorle had such a powerful "weapon" at their disposal. Being even possible that a war against their island would happen just for this reason. Since she was a Teacher a long time ago, they gave her the position of great principal in the Savorle Resonance School but she was not to make any public appearance. She immediately became bored with this job and started to run from work to go fishing instead, making good use of easily manipulated people (such as Clesea Kamishiro) so they could take over her job.

During one of those occasions, she happens to meet the protagonist that showed insterest in fishing by seeing her. Therefore, Aty decided to teach the basics of fishing to the main character. As a result, Aty was once again called “teacher”. She gets a bit uncomfortable at first but accepts the title one more time. However, the hyper talented protagonist immediately masters all the techniques, leading to Aty asking to become an apprentice instead. Since Aty was only fishing weird objects, the two decided to make a deal where Aty would trade hers objects for the fishes. The main character later learned that Aty was actualy releasing all the fishes in the lake since she became even more extreme with her beliefs of never killing.

Later, she let slip a important information about the barrier surrounding the treasure room in the school while having a conversation with Clesea. This leads to the Crimson Chain invading the school to steal Wistalias. fortunately, the one there was just a fake. After this incident, she reveals her true identity for the main party and approves Torque for his growth as a blacksmith, presenting him with his master's hammer. From this point on, Aty starts to be more active during the main plot.

To make a magical barrier to protect the city against Nether creatures, she uses not ony Shartos and Fowyardia, but also a third sword which realeases a green light. She combines the three to form Branryuzell, changing to her transformed state while she keeps the barrier on. She also receives important people from other worlds, such as The Dragon Princess, that she not only calls by her real given name, but also adds a "-chan" at the end, leading to believe that Aty knows her since long ago. Since she has to focus all her powers constantly to keep the barrier on, she decides to trust the future of the island in the hands of the protagonist. sending them to defeat the source of the beasts in the moon.

She boasts a higher MP, MAT, MDF, TEC and LUK growth compared to her Male counterpart, but overall has a lower HP, ATK, DEF and a decreased movement height. 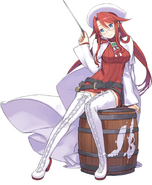 Aty in a Promotional Art for the PSP remake

Aty, Rexx and the students in a promotional art

Aty, Rexx and the Students

Aty with the power of the sword unleashed

Aty & Sonolar in a promotional art

Aty in a Tanabata card in Summon Night Collection

Aty in a Valentine card in Summon Night Collection

Aty in a Christmas card in Summon Night Collection

Aty in a rare card from Summon Night Collection

Aty and her male students 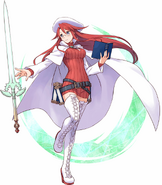 Aty on the Heroes wiki.

Retrieved from "https://summonnight.fandom.com/wiki/Aty?oldid=7335"
Community content is available under CC-BY-SA unless otherwise noted.